The Micheletti Company Limited of the Trassaco Group Limited has been adjudged the Green Building Company of the Year at the maiden edition of the 2021 Ghana Construction Industry Excellence Awards (GCIEA).

The company was honoured for constructing the One Airport Square located at Airport City which is the first certified Green Building in Accra, Ghana.

At the award ceremony held on Friday, September 10, 2021, in Accra, the Managing Director for the company, Mr Ernest Taricone expressed appreciation to the organizers of the awards for recognizing the company’s efforts.

According to Mr Taricone, the company will put in more effort in providing outstanding works in the construction sector and contributing to the growth of the country’s economy.

“We are honoured to receive this award. I am grateful to the organisers of the awards for the honour bestowed on us. I dedicate the award to my hard-working team for their immense support in making this possible. We are going to work hard to support the construction sector and the country,” he said.

Also, at the event, organized by the Ghana Chamber of Construction Industry (GHCCI), 29 other companies and individuals were honoured for their outstanding performances in the construction industry and their contributions to the growth of the country’s economy.

The award ceremony was graced by dignitaries including the Vice President of Ghana, Dr. Mahamudu Bawumia, who was the guest of honour, the Minister for Works and Housing, Mr Francis Asenso-Boakye, the President of the Cape Coast House of Chiefs, Odeefo Amoakwa Buadu, the Chief Executive Officer of Private Enterprise Federation, Nana Osei Bonsu, the Chairman of (GHCCI), Surveyor Emmanuel Martey, and players in the construction industry.

Held on the theme: Creating Competitive Collaborative and Innovative Business Governance for the Construction Industry of Ghana, the award is targeted towards rewarding publicly most distinguished companies, institutions, teams and individual operating in the sector and also serve as a standard for all practitioners to aim at quality production and increase productivity.

The Vice President of Ghana, Dr. Bawumia who spoke on behalf of President Nana Akufo Addo commended the awardees for contributing to the growth of the national economy and development.

He urged them not to relent in their efforts but to continue to attain higher heights in building a robust national economy for the country.

He also indicated that the government has enacted new laws with others in the pipeline to sanitize and regulate the construction industry in order to create an enabling environment for the sector.

“There’s a lot of work ongoing in reinforcing the legal framework to help regulate and create an enabling environment for the construction industry”, he said.

Among the 29 awardees were the Minister of Roads & Highways, Mr Kwasi Amoako-Attah, who was declared the Infrastructure Minister of the Year; the Chief Executive Officer for Ghana Cocoa Board, Mr Joseph Boahen Aidoo, who was honoured as the Best SIGA Construction Industry of the Year; the Chief Executive Officer of Private Enterprise Federation, Nana Osei Bonsu emerged as the Outstanding Excellence Leadership of the Year, with the Construction Woman of the Excellence of the Year going to President for Progressive Road Contractors Association, Madam Joana Adjei. 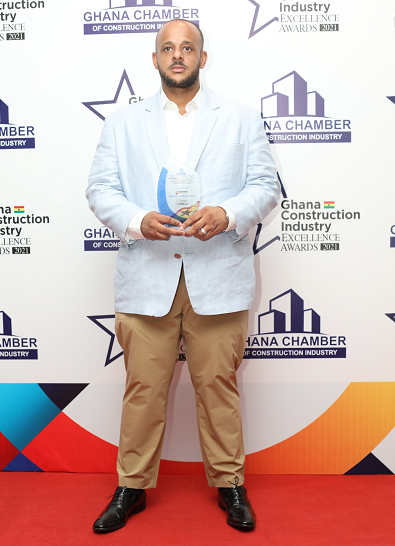 The One Airport Square located at Airport City was certified through the collaborative efforts of Ghana Building Council (GHGBC) and Green Building Council of South Africa (GBSCA) and received a Four (4) Star design rating on the Green Star Office (V1) Rating Tool in 2015. Works on T&A Park by Gold Fields about 73% complete

We use cookies on our website to give you the most relevant experience by remembering your preferences and repeat visits. By clicking “Accept All”, you consent to the use of ALL the cookies. However, you may visit "Cookie Settings" to provide a controlled consent.
Cookie SettingsAccept All
Manage consent

This website uses cookies to improve your experience while you navigate through the website. Out of these, the cookies that are categorized as necessary are stored on your browser as they are essential for the working of basic functionalities of the website. We also use third-party cookies that help us analyze and understand how you use this website. These cookies will be stored in your browser only with your consent. You also have the option to opt-out of these cookies. But opting out of some of these cookies may affect your browsing experience.
Necessary Always Enabled
Necessary cookies are absolutely essential for the website to function properly. These cookies ensure basic functionalities and security features of the website, anonymously.
Functional
Functional cookies help to perform certain functionalities like sharing the content of the website on social media platforms, collect feedbacks, and other third-party features.
Performance
Performance cookies are used to understand and analyze the key performance indexes of the website which helps in delivering a better user experience for the visitors.
Analytics
Analytical cookies are used to understand how visitors interact with the website. These cookies help provide information on metrics the number of visitors, bounce rate, traffic source, etc.
Advertisement
Advertisement cookies are used to provide visitors with relevant ads and marketing campaigns. These cookies track visitors across websites and collect information to provide customized ads.
Others
Other uncategorized cookies are those that are being analyzed and have not been classified into a category as yet.
SAVE & ACCEPT